Video - The Story of Women in the Texas Legislature

“Getting Where We’ve Got to Be: The Story of Women in the Texas Legislature” 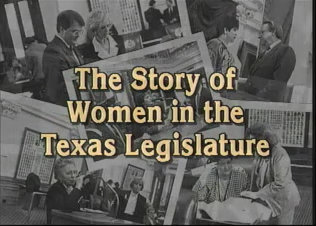 Produced as Texas’s contribution to the 1995 centennial anniversary of the first woman elected to any U.S. statehouse (Colorado), it was made possible by the Center for the Study of Women and Gender at the University of Texas at San Antonio, then under the direction of Dr. Linda Schott, and State Representative Sylvia Romo (D-San Antonio).

As a member of the House, Romo invited her female colleagues to speak on videotape about their political lives (“the good, the bad, the ugly”) as numerical minorities in the overwhelmingly male culture of the state capitol. Although the legislature’s first session occurred in 1846, the first woman did not arrive as a member until 1923, following the passage of the 19th Amendment granting women the right to vote. Even in 1995, women comprised less than 20 percent of all representatives and senators.

Historians Ruthe Winegarten and Nancy Baker Jones conducted these interviews with 28 current and former members of the Texas Legislature. MultiMedia Associates (Molly Dinkins, Dick DeJong, and Jim Cullers) set up shop in House Speaker Pete Laney’s private conference room to record the conversations in May, 1995, during the last days of the 74th legislative session.  These five compiled and produced the completed video together.

When Jones and Winegarten completed their book, Capitol Women: Texas Female Legislators, 1923-1999 (Austin: University of Texas Press, 2000), copies of the video were sold along with the book.

Interviewees appearing in the video: