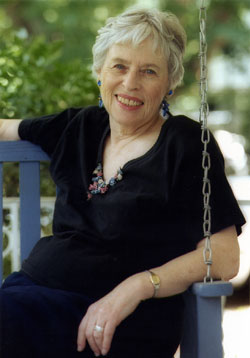 Persistent and indefatigable, Ruthe Winegarten became the most significant advocate of Texas women's history in the state. She was the author or co-author of 20 works on women in Texas history. Born in Dallas on August 26, 1929, the ninth anniversary of the ratification of the 19th Amendment granting U.S. women the right to vote, Winegarten became a social activist as a teenager, fighting segregation and supporting social services and social justice. She volunteered in the 1946 gubernatorial campaign of Homer Price Rainey and maintained a life-long interest in politics. She was director of the community relations council of the Jewish Welfare Federation of Dallas and Southwest Regional Director for the Anti-Defamation League of B'nai B'rith.

In the 1960s, she and Ann Richards became friends and, as fundraisers for the Democratic party, acted in "Political Paranoia," skits sponsored by the North Dallas Democratic Women's Club. Joy Parker, one of the participants, remembered that "Ruthe was the designated censor because some of our material was pretty raunchy (for those days)." Richards recalled of those days, "As we were writing and composing and putting stuff together, we could tell if we were good or not by whether Ruthe laughed… [It] was more done not out of a social consciousness, but out of righteous indignation of what we felt were our rights."

After moving to Austin in 1978, Winegarten was acting director of the Austin Women's Center. From 1979 to 1981, she was research historian for the Texas Women's History Project, which friends Richards and Mary Beth Rogers organized, and was curator of its groundbreaking 1981 exhibit that opened at the Institute of Texan Cultures in San Antonio, "Texas Women, A Celebration of History." The exhibit of photos, artifacts, and accounts of women's accomplishments toured Texas in the early 1980s. "We made the exhibit as provocative as possible," Winegarten said. The exhibit is permanently housed at the Texas Woman's University library in Denton. In 1986, she was curator for two exhibits, "They Showed the Way," at the African American Museum of Dallas and, with Janet Humphrey, of "Austin Women: 150 Years of Trial and Triumph," a project of the Austin Commission on the Status of Women.

Ruthe was determined to tell the stories of as many women as she could, and Graff taught her many of the oral history-gathering skills she used throughout her career. One of those stories, the life of Annie Mae Hunt, a black Dallas domestic worker, became one of Ruthe's best known books, I am Annie Mae. After it was published, Ruthe collaborated with composer Naomi Carrier to turn the book into a musical, which enjoyed popularity in the late 1980s and early 1990s. Strong Family Ties: The Tiny Hawkins Story, about the black owner of a South Dallas nursing home, was published in 1998, a collaboration with Debra Winegarten, Ruthe's daughter.

From 1986 to 1996, she served informally as a consultant in women's history to the staff of The New Handbook of Texas revision project, and in the 1990s formally advised the nascent Bob Bullock Texas State History Museum in Austin about its representations of women. When most of the Handbook staff of writers responsible for researching and writing entries about women, African Americans, and Mexican Americans were released in 1992, due to lack of funding, Winegarten objected vocally and repeatedly to the "last hired, first fired" nature of the releases.

Ruthe Winegarten won the Texas State Historical Association's Liz Carpenter Award (for the best scholarly book in Texas women's history) twice, first in 1995 for Black Texas Women and again in 2000 for Capitol Women (a history of women in the Texas Legislature), which she co-authored with Nancy Baker Jones. Las Tejanas, co-authored in 2003 with Teresa Palomo Acosta, won the Texas Historical Commission's T. R. Fehrenbach Award (for the best book in Texas history). In 2003, Winegarten was elected a Fellow of the Texas State Historical Association. Although she said that she was tired after completing Las Tejanas (saying it was "the hardest book I've ever done. There was so little research to draw on."), Winegarten soon embarked on a collaboration with Elizabeth Snapp to produce a documentary history of women in Texas. It was incomplete at the time of Winegarten's death in 2004.

In the 1990s, Winegarten became a faculty associate and community board member of the Center for the Study of Women and Gender at The University of Texas at San Antonio. As such, she collaborated with the Center on the production of a video history of women in the Texas legislature, which featured many videotaped interviews she and Nancy Baker Jones conducted with former and current legislators.. The result, "Getting Where We've Got to Be: Women in the Texas Legislature," was the State of Texas' contribution to the nationwide 100th anniversary celebration in 1995 of the election of the first female state legislator. She also worked with the Foundation for Women's Resources to produce the video history and teaching guide for 7th graders, "Gutsy Mavericks and Quiet Heroines: True Tales of Texas Women," in 1997.

Theresa May, Winegarten's editor at the University of Texas Press, said of Ruthe, "She was tireless in terms of trying to bring to light the histories of people and the lives of people who had been forgotten." Former governor Ann Richards remembered Ruthe as "a scholar and an enormous influence on the history of Texas women. Her commitment to having the stories of women's lives be a part of our history was a driving passion in her life. We owe her a debt for her work and her friendship."

Of her own work, Ruthe said, "I've had such a good time. I never felt it was work. It's important for people to follow their bliss if they can. Some people have other obligations, but they should get as close as they can. They'll be healthier and happier."